A most complicated dance... 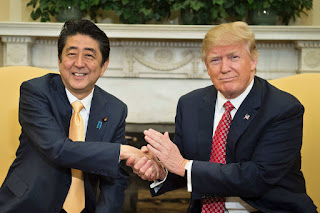 "How do I think this trip went? They are popping the corks at Lockheed Martin today. 105 F-35 jets is worth a whole bunch of cheddar."

In early June, we will be coming up on the 75th anniversary of D-Day. A huge day in our history. Meanwhile, while D-Day was taking place in Europe, we were also at war with Japan in the Pacific. America and her allies were stretched very thin, and the fate of the world hung in the balance. Japan, like Germany were hated foes. Flash forward to today. The United States, Germany and Japan are friends, allies, trading partners. And our President has just wrapped up a trip to visit one of his new best friends - Prime Minister Abe of Japan.

They are friends - right? More or less. Right now, Abe is shaking in his shoes about the trade issue. Why? Japan has made out nicely for years with the trade imbalance between our two countries. Enter Donald Trump. In 2018, our trade deficit with Japan was almost $60B. Trump says that is too high. He want a new trade agreement with Japan which will whittle that deficit way down. If Abe balks, get ready for a 25% tariff on Japanese cars. That would really be a zinger for a country which is having some economic problems.

Then there is North Korea. For the most part, Trump and Abe are on the same sheet of music. BUT - Trump is still trying to woo Kim, despite his recent bad behavior. Abe wanted more of a stern response from Trump after Kim fired those short range missiles. From press reporting, that issue with North Korea was a sticky wicket between them in their talks.

BUT - what Trump has been doing in the background, is really beefing up the defenses of South Korea and Japan. How much so? Over the next decade, Japan is going to buy 105 F-35 fighter jets. In fact, both South Korea and Japan are going to get a slew of these bad boys. And stand by - current projections are by the time the final jets are delivered, the variant of the F-35 at that time could have the new laser weapon included. The on board laser which will be able to knock down not only enemy planes, but also missiles.

If the trade talks go south, how in the world could we be in a trade war with Japan and selling them our latest and greatest jets at the same time? That is why the dance between the two countries is so complicated. Fixing out trade imbalances is LONG overdue, and President Trump is committed to it. He is also committed to helping our allies become more self sufficient from a defense standpoint. No more being the only policeman in the world. He wants our allies to step up to the plate and be able to defend themselves better.

How do I think this trip went? They are popping the corks at Lockheed Martin today. 105 F-35 jets is worth a whole bunch of cheddar. I believe that our relationship is so very important to Japan, they will acquiesce on the trade issue. Might not get down to zero, but it will improve. Plus, Abe said he would meet with Iran and try to get some talks going between the US and Iran. I call that a win.

I love Japan. I love the people there. After living there for 18 months, I grew to understand their culture. My hope for the future is we can have the same type of relationship with Viet Nam, that we now have with South Korea and Japan. Maybe...maybe,,,,even North Korea some day.