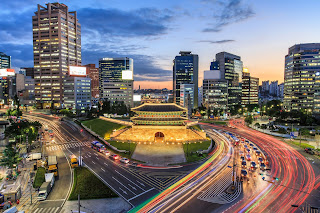 "The world is watching and hoping right now. This is a rare opportunity which only comes about once in a very long time. "

I have mentioned this in the past, but not for a while. A couple years ago, when it looked like we were finally going to get around to full naturalization of relations with Cuba, I told my Congressman (who was one of the proponents) that I was in lock step agreement with him. Why? Freedom. Nothing sells freedom like letting just a bit of it under the door. I have seen close up how freedom loving countries act in Latin America. It is a beautiful thing to behold.

Then a speed bump hit. The sonic weapon attack on our embassy staff as well as some unforeseen barriers by the leftover Castro regime. Unfortunately we will have to leave Cuba for another day. Sad. For a country only 90 miles from our southern tip, we should be BFF's on trade and a whole bunch of other things.

North Korea. The first bit of daylight came through the window during the Winter Olympics in Seoul. Kim's sister, whose opinion Kim really respects, was an invited guest by the South Korean government. While in the South, she saw how freedom operates. She saw the prosperity that freedom allows to flourish. And she also met the daughter of that most hated man who now runs America. But the daughter of that most hated man, Ivanka, simply wooed her with kindness. All this was taken back to the North, and reported to her brother. The rest is developing history.

Here is how I see this deal happening with North Korea. There will be certain verifiable milestones which the North Koreans will need to hit. Once a milestone is reached, there will be the easing of one (or more) of the sanctions. Along with the easing of sanctions, companies will begin to apply for State Department licenses to do business in North Korea. Fast foods, hotels, maybe some banks will start to appear. Soon the green sprouts of international commerce will begin to be noticed in Pyongyang.

What does Donald Trump want for North Korea? First and foremost, a denuked country which is no longer presents a threat to the world. Then he wants the seeds of freedom to take hold - first starting with commerce. Over time, he would like the cities of Seoul and Pyongyang to look more similar than dissimilar. He wants the horrible human rights abuses of the North Korean regime to be only known in history books. In short, he wants a new dawning in North Korea.

Many are still leery of the intentions of the North Korean regime. Are they going to play us like they have so many times in the past? Or, are they finally going to finally join the league of nations (so to speak). Where not only will commerce start to flourish, but hunger and starvation will be a thing of the past. Where old grudges with countries like South Korea, Japan and the United States are replaced with new bonds of friendship and trust.

The world is watching and hoping right now. This is a rare opportunity which only comes about once in a very long time. Let's hope for the best. Let's hope that something has touched Kim's heart for him to really, really want change. Or maybe we just hope Kim will believe the famous lyric to the John Lennon song - "Give peace a chance".
Posted by Very Angry Bird at 5:50 AM