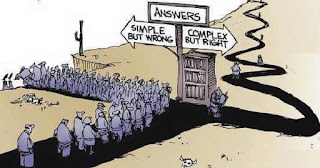 "What is my point? As good as Occam's razor is for some things in life, it is terrible for making political decisions. How do I know? Occam's razor gave us people like Mark Dayton, Lori Swanson, Becky Otto, Keith Ellison and Al Franken. I think that is all which needs to be said."

Occam's Razor. One of my favorite terms. For those who don't know what the meaning is, or have simply forgotten, here is what it means. When confronted with a problem which takes a solution, the easiest, or simpler solution is often the best. For many, it offers the path of least resistance. Why do I bring that up? I am starting to think it is endemic in Minnesota politics today. Huh?

Really. Lets look just for a minute at the position of Attorney General. As we know, there are lawyers on both sides of the political aisle who have run for this position. The Republicans have offered up some excellent candidates who have gone down in flames against an inferior Democratic opponent. How long has that been going on? I graduated from high school in 1967. Last year we had our 50 year reunion. That was the year Douglas Head was elected to be Attorney General. His term was up in 1971, and it has been in Democrat hands ever since.

That means in 11 or 12 election cycles, Republicans have put up a candidate to run for this office - and lost. Why? People in this state started to assume that was a Democrat position. Who to vote for in November? Occam's Razor thinking took over. Pull the switch for the Blue Team ticket. Easy peasy. Was the Democrat the most qualified? Who cares? It was easy.

There are other positions in Minnesota which have been majority Blue Team in the past few decades, but none as bad as the Attorney General. For example, we have had the biggest village idiot in all of Minnesota beat two of the Red Team's finest in the past two election cycles for Governor. Why? Many people don't want to do the tough work to learn about the candidate or the issues. They just assume we need a Blue Team Governor. PLUS - and this is a big one - the Blue Team always promises a chicken in every pot - yet never delivers. All the Red Team offers is opportunity for all, and living life under constitutional law.

Tim Pawlenty is running in the primary against the MN GOP endorsed Jeff Johnson. TPaw's strategy? Appeal to the uninformed. The ones in the hinterland who were not paying attention to all the RINO, statist crap which happened during Pawlenty's eight years as Governor. Yes, Pawlenty is banking on Occam's razor to propel him to victory in August. Jeff Johnson on the other hand, is still meeting voter by voter, driving to town after town. He is explaining his vision and his platform to all who will listen. And most all who listen to Jeff, love his vision.

It is embarrassing we still have voters anywhere in this country who are totally uninformed. Trust me - I have talked to more than just a few. They are like people in the movie The Matrix who keep taking the blue pill (Funny, the color of that pill and the color of the Democrats are the same!).

This year, more than any other, if Minnesota truly voted informed in the November election, we would have a red state which would stick out like a beacon in the upper Midwest. Governor Johnson and Attorney General Wardlow would put an end to this evil called refugee resettlement. We would take Minnesota back from the brink.

We could invite our seniors back, as Minnesota would no longer be taxing their Social Security. We could invite new businesses in and our expatriated businesses back, to take advantage of our new much lower business tax rate. Minnesota will once again be a mecca for all who love a beautiful state with great freedom and great livability.

What is my point? As good as Occam's razor is for some things in life, it is terrible for making political decisions. How do I know? Occam's razor gave us people like Mark Dayton, Lori Swanson, Becky Otto, Keith Ellison and Al Franken. I think that is all which needs to be said.