Dying for a vote 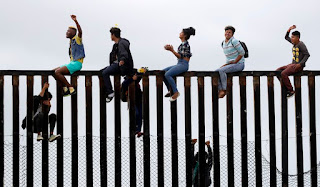 "When I look east now to see Lady Liberty, I see her hanging her head in shame. We have come a long way since Ellis Island - a long way down. We have gone from order to disorder. From sanity to chaos."

One would have to have the IQ of a rock (or lower) not to see the game which is being played out on the southern border. It has turned out to be a war, a war in which we are losing. Let me re-phrase that. It is a war in which the citizens and patriots of this country are losing. The socialist democrats are happier than clams right now. Why? Their side is winning. Their side, meaning supporting the hundreds of thousands of illegals who are going under, over and through our porous southern border. And each one of these people represents one more vote for the socialists.

How bad is it right now? Real bad. Since our country refuses to speak with a common voice on this issue, the cartels, the gangs, the coyotes are having a field day. More drugs are making it across, more trafficked children and women are making it in, and of course, up to a million more illegals are expected to hop the fence by year's end. How do I know of this? I watched part of the DHS hearing yesterday, where despite boorish behavior by the socialist democrats towards the DHS Secretary, Ms. Nielsen laid out a frightening scenario. Our southern invasion has gone from a trickle, to a stream, to a full frontal assault.

A million more illegals in this country by year end. That number is higher than the population of some of our states. According to the DHS, that number of people will completely outflank our resources to contain. As this dire picture was being painted for the socialists on the committee, some of the socialist rocks could only ask about cages for kids. You know - the cages which go back to the Obama Administration. Funny these cages never got mentioned back then.

Other bits of information are also starting to come out. Like we now need to give all the young females, down to age 10, pregnancy tests. What? Why? Because so many have been sexually assaulted on the long trip up here. We have also found out the coyotes are telling EVERYONE to ask for asylum, whether they need it or not. That will ensure them entrance into the United States. We are so bound up by PC nonsense, as well as tripping over socialist hurtles, that evil plan is working. We are becoming flooded with peasants. Peasants with no vocational skills, no English language sills, and no citizenship.

Well played Democrats, well played! All this for more votes. You are so sick and twisted, you are blind as to what you are doing. You are now single handedly accomplishing what the Nazis, the Japanese, the Soviets have not been able to do this country. You are wrecking it. Brick by brick, you are tearing this wonderful country apart. Dismantling it. But maybe that is the plan. The plan you useless idiots have had in your back pockets. Maybe you have been playing for the other team all along.

When I look east now to see Lady Liberty, I see her hanging her head in shame. We have come a long way since Ellis Island - a long way down. We have gone from order to disorder. From sanity to chaos. From a republic to anarchy. All because the socialist democrats want more votes, to give them more power, to give them more wealth. Sick.

Here it is folks. In the 70's there was a best selling book called The Greening of America. Today, we all could write a new book called The Fleecing of America. And once the fleecing is over, our country will never be the same again. Never. All for votes. Socialist votes. Votes that many migrants have already died for on the journey north.