Playing or being played by the Norks? 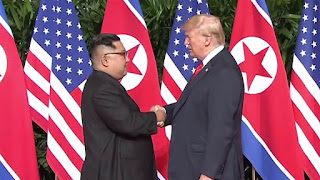 "Next step? To use the President's own words, 'We will see what happens.' Opportunities abound for this primitive country. Good things could be in the offing. Or - could be more of the same."

I am going to give the President very high marks on his efforts to bring this ancient dynasty into the 21st century. As the old wild west statement goes - "It ain't easy, you know!" No, it certainly is not. The North Korean government is a nasty bunch of brutal dictators, who make lousy neighbors. But Donald Trump is convinced that by playing nice with these guys, holding out a huge carrot instead of a sharp stick, might bring them around. So far the progress as been just north of a "meh".

The plan was good for the first two meetings. Fly halfway around the world to meet Kim in Malaysia and then Viet Nam. Two countries with bustling economies. Offer Kim a basket full of goodies once he has de-nuked. If nothing else came out of these talks, we got the remains of some of our fallen back, and the missile and nuke tests stopped. It really did look like we were on the road to improvement.

Then the way the Viet Nam talks ended. For a negotiator, this was only a pause in the process. Happens all the times in the bigger deals. For the neophytes, it was disaster. The talks collapsed. Now the Norks are going to restart their nuke and missile tests. We are right back to square one. Or are we?

Here is my take. Kim is a "man-child". He is the product of a brutal father, and just as brutal grandfather. Despotism is all he knows. Truthfully - his world view is the polar opposite of our President's. When Donald Trump offers Kim peace and opportunity, Kim can see only fear. Fear that his reign of terror in North Korea might be the last for his bloodline. And the way he has mistreated his population, his fear is justified. I am sure many in North Korea have fantasies of putting Kim in front of anti-aircraft guns and having him chewed to pieces - like he has done to his political enemies.

What is our posture going to be if Kim lights off another missile? Or if he reactivates one of his nuke sites? I would then love to see the President withdraw the carrot and show Kim the "stick" like he has never seen it before. We recently canceled our joint military exercises with the South, as Kim has found them offensive. I would conduct the biggest, baddest joint exercise in the history of our partnership with the South.

There are many other things we could do to tighten the screws further. Not our choice to do so, but Donald Trump needs to behavior modify this "man-child". How do I see Kim? Not the same way our President does. While Donald Trump has been blowing sunshine on this little rocket man, I would rather see him arrested as a world criminal and then tried at the Hague. Some the atrocities he has committed against his own people are simply too graphic to put in this article. He is a Saddam Hussein on steroids.

Next step? To use the President's own words, "We will see what happens." Opportunities abound for this primitive country. Good things could be in the offing. Or - could be more of the same. Time for the "man-child" to grow up and smell the coffee. If he screws this up, the only thing he will be smelling is the further decay of his country.