A global game of chicken 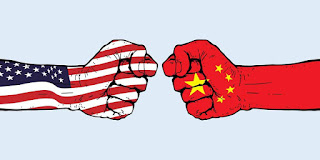 "In any event, this issue will not be passed on to Donald Trump's successor. Donald Trump is not a victim of 'analysis paralysis' like some former Presidents."

If I have not said this for a while, allow me to say it again. I am really, really pleasantly surprised by the job Donald J. Trump is doing since taking office. I admit, I was reticent. I was a Ted Cruz guy before the endorsement. Once Trump became the endorsed candidate, I hopped on the Trump Train, although reluctantly. If I had known then what I know now, I would have been President Trump's biggest cheerleader from the get-go.

This man, although not perfect, has done a stellar job on many different difficult issues. The economy is red hot, taxes are getting better, talks are going on with North Korea, a near term summit is planned with Putin, the Supreme Court is being restocked with orginalists, thousands of job killing regulations are being undone, and now our decades old trade deficit issue is being addressed. All this while the media, the Washington Democrats, and the "lackey" Robert Mueller nipping at Donald Trump's heels.

Some might say this trade war with China is unnecessary right now. I would agree with that. This issue should have been handled many years ago. But it was not. Yesterday, some guru was on one of the financial channels, and brought up a good point. Although somewhat course, I got the message. "We got China by the short hairs right now!" In other words, the way we are positioned, and the way China is positioned, favors us in the long run.

Is this trade war going to be painful for some in our country? Yes - some industries more than others. In fact, it was pointed out that China's retaliatory tariffs were aimed at items produced in our red leaning states. Why? To make this trade war politically painful for the President. But the Chinese are now dealing with Donald Trump. He is accustomed to stare downs. And this President does not blink.

Many financial experts I have heard of late say the same thing. This will be a short trade war, and our trade imbalance will improve once it is over. Why so? Our biggest imbalance is with China, and whether we like it or not, we are joined at the hip with the Red Dragon. They own our debt, and we buy a butt load of their stuff. All we are asking of them is to buy more of ours. It really is as simple as that. Cooler, and more rational minds in China will come to realize that.

As far as Canada is concerned, it would behoove them to play ball with this President. The NAFTA Agreement might hang in the balance. Donald Trump has been carping about NAFTA since he was on the campaign trail. Canada and the US should be holding hands like twin brothers on trade. But they are not. And Mexico? That is a whole different story.

In any event, this issue will not be passed on to Donald Trump's successor. Donald Trump is not a victim of "analysis paralysis" like some former Presidents. No - he is a "get-r-done" type of leader. And guts? He is doing this right before the mid-terms. Smart politically? Probably not. But it is the right thing to do. And to do it now.
Posted by Very Angry Bird at 6:08 AM