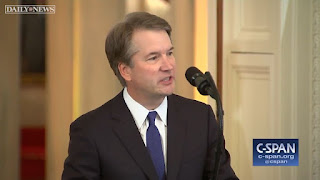 "Welcome Judge Kavanaugh. You are a good man. Thank you for volunteering to step into the fray. Speaking for many of us in the country, I would like to offer apologies in advance for the needless crap you will be put through by the press and the RESIST! movement."

That did not take long! As a matter of fact, it was so quick, some of the hate literature was handed out before his name was released. The RESIST! movement only referred to this SCOTUS pick as "XX" in the lit they were distributing. And then once Judge Kavanaugh's name was released, the lit was quickly corrected - sort of. They misspelled the Judge's name with a "C" instead of a "K".

But the haters were out in numbers last night! As predicted, the caterwauling had started early - even while the Judge was introducing his lovely wife and two daughters. If we could pretend for a minute that our nation was not in the middle of this great divide, and look at this man fairly, the question would beg to be asked, "What is there not to like?"

He clerked for Justice Kennedy, he has been on the DC Circuit Court of Appeals for a dozen years, written hundreds of opinions, is a youth sports coach, donates time and money to the homeless and hurting in the DC area, and is liked and respected by just about everyone. So what is the problem? Oh, the "C" word. He is a conservative.

Actually, there is another "C" word which scares the Left even more right now - Catholic. What if he is pro-life? What if he does not believe in any type of abortion? What if he wants to "deep six" Roe? These questions will be asked of the judge over and over and over again as he is paraded around the Senate.

The one thing the judge is however, which delights most of us on the Right (actually, it should delight all Americans), he is a originalist who believes in textualism. Translation = the courts interpret the law, not make it. As far as President Trump is concerned, that is issue number one. As much as the right to life folks would love to have something done about Roe v Wade, that issue is still way too hot to handle. Someday maybe, but not today.

I hope the judge is up for what is coming his way. I remember clearly the brutal treatment that Judge Bork received. And why? He was smart, and he was conservative. This man however, does not have an "edge" on him like Judge Bork did. One pundit this morning said if our political climate was as it was 30 years ago, Judge Kavanaugh would be confirmed 99-0. But it is not. And if confirmed, it would be by the most narrow of margins.

One final thought. Most pundits I have listened to believe although it will be a tough fight, Brett Kavanaugh will be confirmed. The big fight, the no holds barred fight, will come when RBG becomes unfit for duty. If that happens during the Trump Presidency, I think I will fly down to Australia for six months. That pick, even if were someone as pure as Mother Theresa, could rip this country apart.

Welcome Judge Kavanaugh. You are a good man. Thank you for volunteering to come into the fray. Speaking for many of us in the country, I would like to offer apologies in advance for the needless crap you will be put through by the press and the RESIST! movement. It should not have to be that way, but we are where we are.