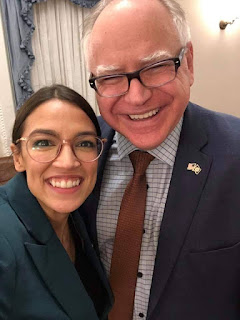 "Taxing Timmy, the retired Army National Guardsman, did a classic military maneuver on the Senate Republicans. He carpet bombed them. It was an all out saturation attack."

Ever take a shower with your raincoat on? Me neither. But I think we all can imagine what it would feel like. Like not taking a shower at all. Even though the force of the shower was hitting us, we would still not get wet. Nor clean. That is how many on my side of the street are feeling after this first session. In particular, what our Nebraska boy, Taxing Timmy Walz, did to us. Even though for two days in a row now, the local paper has been lauding praise on Taxing Timmy for what a wonderful and masterful job he did in orchestrating this past session, I still feel like my raincoat is still on.

Taxing Timmy, the retired Army National Guardsman, did a classic military maneuver on the Senate Republicans. He carpet bombed them. It was an all out saturation attack. Throw everything at the Republicans but the kitchen sink. See what sticks to the wall once the barrage is over. And it worked to a tee. Even though some of Timmy's "false flag" initiatives (like the gas tax) went down in flames, other more subtle tax increases made it through.

The fact that the gun grabbers got "red flag" legislation to pass the House was a shocker. That portents bad things for next session. Why? Now the grabbers are emboldened. Like bad pennies, they will keep showing up. In fact, should the Republicans lose the Senate this next election, even by one seat, it will be Katy bar the door. Carpet bomber Walz will take out simply everything good in what is left of our government. He has learned much from his buddy AOC. In fact, look for some of that good old socialism to hit home if we lose the Senate and don't retake the House.

I know, I know. Considering the shellacking the Republicans took in the last election, it is amazing Walz did not skin us more. Thank goodness for small favors. Even though the Governor outplayed the Senate Republicans with the carpet bagging, the session could have ended a lot worse for the Red Team. But the bottom line is this - government STILL GREW.

So that is it for a while with state politics. That is, unless something unplanned happens. After today my main focus will be the national scene and technology. There is a ton of stuff going on in both those areas.

The weather today calls for a lot of rain. Time to take this raincoat off and stand outside. Maybe then I can get clean, and remove the stench of this session's carpet bombing.