A whole lot of explaining is needed on this one! 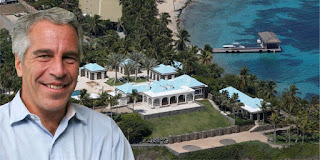 "Bottom line is this. Will there be justice for the sex trafficking which went on under the watchful eye of Epstein? Not unless you find a prosecutor like Vincent Bugliosi."

First off, please let me clear the air on one thing. This is about as profound as saying water is wet and the sky is blue. There is not one beating heart in America (maybe the world) who believes that Jeffery Epstein committed suicide. If someone does believe that, I dare say that person would either be incredibly naive, or just plain a fool. There - the air is cleared.

This has been, without a doubt, the most anticipated "suicide" of all time. Especially since it involved the Clintons. And oh, boy - is the state of New York ever in some deep, deep do-do over this one! The one man, who held the keys to the kingdom for such things as "the Lolita Express", and maybe ever "Pizza-gate", should have been guarded more closely than the crown jewels. Instead, after one botched "suicide" attempt, he managed to off himself while living in a suicide proof cell under a suicide watch. How does that happen? Explain that one New York!

With the Clintons, it is that old adage - "Dead men tell no secrets." Ever look at the body count left behind the Clintons? It is like the aftermath of a war zone. But forget the Clintons for just a minute. The list of rich and powerful who Epstein could have blown the whistle on goes on for miles. So much so, if he was not guarded like the crown jewels, his life expectancy could have been measured in hours, or maybe minutes, once hitting jail.

Now that the star witness is dead, where does that leave the prosecution. Probably scared to death to start with. Who wants to get involved in this quicksand? Talk about a death sentence! For someone to hang himself in a cell, which has rip-proof sheets, nothing high enough to hang with, and under constant surveillance - this is one powerful group of folks who do not want their secrets told.

Bottom line is this. Will there be justice for the sex trafficking which went on under the watchful eye of Epstein? Not unless you find a prosecutor like Vincent Bugliosi. To go after Manson the way he did, without knowing how many of Manson's supporters were still out there, took stones the size of Kansas. But he did it, put the bad guys (and gals) away, and lived to the ripe old age of 80.

I am only wishing and hoping that Epstein left some kind of records which would provide a modicum of justice for the poor kids who were trafficked and then abused. Why? I really want some day, if I live long enough, when my grandson comes up and asks, "Grandpa, is justice really blind in our country, or do we have two systems of justice? One for the weak and poor, and the other for the rich and well connected." I want to look him in the eye and say, "Maybe at one time we had two systems - but no more. Yes, justice is blind in this country. Everyone gets treated the same." If we can't say that to our grandchildren, we have truly failed.