And about those knives!!! 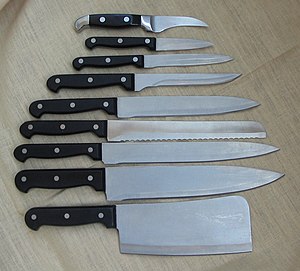 "Until we admit to God that we have made a mistake keeping him on the outside, evil will continue to visit our land on the inside."

Uh oh. Seems there was a mass murder in California yesterday. Four dead, others hurting. What? More gun violence? Nope - knives. Someone, with hate in his heart, went on a killing spree. With knives. By the way, did you know that knives can kill just like guns can? Well, not by themselves. But the person holding the gun or knife, can kill. Actually, if the person was holding a rock, he could kill. Or kill just using his or her hands and feet. Get the message? Killing is killing.

According the the Evening Standard website, in London during the year of 2013, they averaged 1,000 knife attacks every month. Let that sink in for a minute. In a city where guns are as common as hen's teeth, knives have become the weapon of choice. What kind of knife? Any kind. What if we make them illegal now? There go the cutlery sets. Get ready to cut your steaks with a fork. That is - until people start killing other people with forks once knives are outlawed. Then when folks are outlawed, we are all stuck with spoons.

I remember reading years ago, the perfect murder would be with a frozen pot roast. You could bludgeon someone to death with the frozen roast, defrost it, and then eat it. Bingo - there goes the evidence! No murder weapon! Why do I bring up this ridiculous example? To show if hate is in the heart, and murder is in your plans, the method of murder does not really matter. Guns are NOT the problem. Hate in the heart is. Fix that problem first, and then guns become a non-problem.

Yet, here we are. Once again. Same old, same old. Now the President is considering Red Flag laws for gun owners. Most gun owners will tell you that Red Flag is not the "slippery slope" - it is the cliff. It WILL lead to the abolition of all gun ownership, and then the abrogation of our Second Amendment. Will that make us safer? First off, there will be millions of black market guns which will still be owned by the predators. Then, if the London knife statistics were the same here, we would have about 35,000 knife attacks each month (we have about 35 times the population of London).

One more very minor detail. Most, if not all, of the law abiding gun owning citizens I know, will not give up their guns. If the government comes to take them, the citizens and patriots will act like the patriots back in the days of Paul Revere - if need be, they will hide their weapons in the woods. Why? Besides being a natural right to own firearms, patriots do not want to surrender any self defense only to become prey to predators. I know I would not.

Mr. President - this is the time for this nation to REALLY figure out the WHY of these mass murders. I know, I know. The Democrats HATE it when you bring up God. But here is the fact of the matter. When we take God out of the equation, the enemy is very happy to fill in the gap. When the enemy is in control, it is easy to have hate in your heart. With hate in your heart, it is easy to take ANY kind of weapon and kill one or more people.

Otherwise, we can continue to look at video games, Hollywood, single parent homes, meds, diets, mental health, guns, knives, or whatever. These are all superficial to the root cause. Until we admit to God that we have made a mistake keeping him on the outside, evil will continue to visit our land on the inside.