The coming "die off" 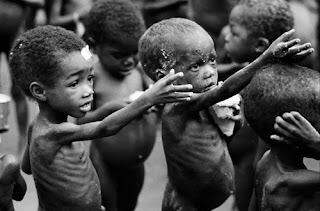 "This nation, as well as the rest of the world, need to be better stewards of our land and the water. To prepare 'the table' to feed 10 billion people by the year 2050, we really need to do better."

First the good news. The human race has done a great and wonderful job (thanks in large part to the United States), of proving Robert Malthus wrong. Proving him wrong, time and time again. Really? How so? The Malthusian Theory, which many of us learned back in high school (that is, when high school still taught important stuff to learn), was about the population of mankind outstripping our food supply. The result was not going to be pretty for mankind. So far - it never happened.

Now the bad news. Recently in the media, there was a story about how lousy many of the world's land management practices are. (Dare I use the following word?) - In other words, not sustainable. This is the year 2020. The organic population of this country may have leveled out a bit, but in other countries, it is full speed ahead. And in some of those dirt poor countries, that means nothing but big trouble in the near future.

Take India for example. Soon, the population of India will outstrip China's. Nigeria's will outstrip the United States. To get more land in South America as well as other tropical areas, rain forests are still being dug up to be replaced with open fields for agriculture. Bad move. Rain forests have long been dubbed the "lungs of the world". To reduce those forests, is to reduce the "lung power" of the globe.

Now the real bad news. The population of the world is expected to be over 8 billion by 2030. That is only 10 years away. By 2050, thirty years away, it is expected to reach 10 billion. That is - if we don't have a huge "die off" first. We are ripe for one right now. If for example, we had another 1930's type drought (the "dust bowl" drought), we could barely feed ourselves, much less the rest of the world. If that same drought affected Europe and Australia, the world could be in for a catastrophe. The resulting "die off" could affect 10's, maybe 100's of millions of people - or more.

Even in our country, we need to do better. The other day when driving in the country, I saw irrigation systems going full steam. Rain wave type irrigation at 2 in the afternoon. A good portion of water, using that type of irrigation, gets lost to evaporation. Wasting valuable ground water. Drip irrigation, which has been around for years, is seldom used. It should be.

This nation, as well as the rest of the world, need to be better stewards of our land and the water. To prepare "the table" to feed 10 billion people by the year 2050, we really need to do better. If we do not, Robert Malthus could at long last, finally be proven correct. And the world will have its numbers cut down by a very large, and catastrophic "die off".